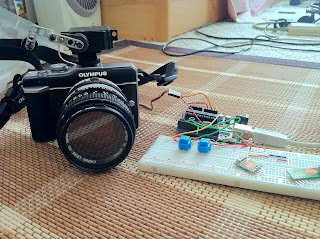 I own an Olympus E-PL1 and I love the camera but one thing I wish it has is a remote shutter release.

Looking through my closet for usable junk, I found my old remote control car which uses a servo for steering and a bunch of Legos.
I mounted the servo to the hot-shoe portion of a broken flash unit and I control the servo with an Arduino.

I programed the Arduino so that the system can be used as an intervalometer. The blue button on the left is used to enter the duration in seconds and the button on the right starts the shutter action. The RF module sitting on the board will be used later to release the shutter from a distance.
Posted by Ryosuke Shibano at 4:17 PM

Ryosuke Shibano
I love to tinker as well as learn new things. This blog will be a place to document my projects, hobbies and whatever else I'm doing at the moment.